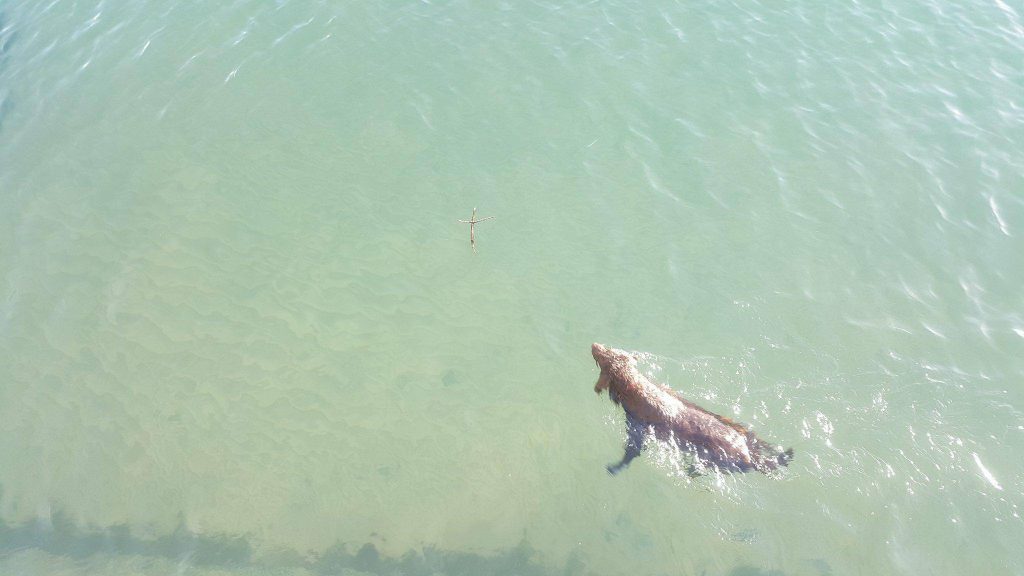 Today my dog learned that bravery isn’t being unafraid, it’s being afraid but doing it anyway!

Let me introduce you to Nelly. In this video you can see our brave water-dog attempting to climb the wall in order to avoid jumping from the steps to fetch a precious fragment of stick. She dived in eventually and after two or three goes she was right at home.

She’s a crossbreed between a Labrador and a Poodle, often called a Labradoodle. Nelly conforms to her genetic predisposition perfectly, like both her ancestral lines she LOVES water! So much so that on this recent trip to Roundham Head in Torquay we were puzzled by her reluctance to get into the crystal clear water.

Usually Nelly whines by the water’s edge and fetches a stick for you to throw in, but this time no amount of cajolery would persuade her to jump in.

We figured out what the problem was. This time, unusually, she had to enter the water from steps. For the first time in her life she was stood on a step between where she was, and the object of her desire.

She couldn’t do it because it was unfamiliar.

Everything was normal except her starting point. This is a dog who throws herself off rocks, leaping for several meters as she does so, scared to enter the water that she loves so dearly.

It reminded me of how I learn. When I approach a new thing it feels like I will never master it, as though I am too stupid to ever grasp what needs to be learned. My first attempts at using Photoshop, for example were quite, shall we say, vocal (none the images on this post have been Photoshopped btw).

The more you learn, and the more forgiving you can be to yourself whilst you learn, the easier it becomes. I now swear a lot less at Photoshop.

Doing new things is healthy. Feeling out of your depth is normal and it takes a certain bravery to try new things. In fact when you start doing something new, you are literally building synapses in your brain – connections between neurons. There’s hard work to do and it takes time and energy.

You literally lack the brainpower at the beginning, and overcoming this lack takes bravery. You can be afraid but still do it anyway.

The more you practice the new thing, be it using a knife like a professional chef, playing football or programming Javascript, the easier it gets to learn more. Sure, you learn that there is more to learn, but you grow to enjoy the growing.

It’s said that to master a skill one needs to dedicate 1500 hours to studying it. Nelly didn’t have time for study, she had to overcome her doubts and dive right in!

Recently I realised that our son didn’t know how to cook. It dawned on me that as a household we actually have a pretty dull diet. For the sake of our son’s education I’m learning new recipes – I started with this one when we were given a load of courgettes. What on earth can you make with courgettes, I thought?

I was unsure that it work, my son was unsure he would eat it, Shannon (the better half of Dartmoor Sheepskins) wasn’t particularly keen on courgettes.

The whole family grew synapses this week, the courgette bake was delicious!

The point is, try something new. In previous blog posts I’ve given instructions on how to make a bottle garden, create unusual planters, turn a tree stump into a garden feature, breed goldfish and dye material using natural mimosa powder.

Why not learn how to buy a slither of Bitcoin (which we now accept as payment in our shop), take up ballroom dancing or learn another language? If Nelly can do something new, so can you.