Legend has it that King Arthur was conceived at Tintagel Castle (Cornish: Dintagel) it’s a medieval fortification on Tintagel Island, battered by the Atlantic Ocean on the north coast of Cornwall. Long ago it was known as Dumnonia, ancient seat of power in the South West.

The site was possibly occupied in the Romano-British period, as an array of artefacts dating to this period have been found on the peninsula.

It was settled during the Early Medieval period, when it was probably one of the seasonal residences of the regional king of Dumnonia – Wikipedia

Whether King Arthur even existed is a moot point. Nobody knows for sure. It’s interesting that the Royal family don’t name any sprogs ‘Arthur’ almost certainly to avoid having to decide whether he would be Arthur the first or Arthur the second.

It was a Royal palace.

Archaeologists have discovered the impressive remains of a probable Dark Age royal palace at Tintagel in Cornwall. It is likely that the one-metre thick walls being unearthed are those of the main residence of the 6th century rulers of an ancient south-west British kingdom, known as Dumnonia – The Independant

Walls still remain from the 6th century and you can lean over them and look down the cliff.

The oldest stonework we saw was on the upper outer courtyard. Much of this fell into the sea shortly after completion. What remains is solid and has stood strong over millenia. Looking west over this ancient wall is breathtaking. The Atlantic crashes hundreds of feet below and gulls wheel between you and the rocks at the base of the cliff face. One gets a realistic sense of danger.

Modern restorations have been carefully crafted to replicate the original stonework.

Whilst the following photos show how easily the island castle would be to defend.

Ancient Tintagel was a larger, single, castle extending across the mainland and what is now the island.  Visitors must now cross a bridge to the island as the land between has been destroyed by the ocean.

It’s obvious that defending the island would be easy. A single point of entry up a steep stairway on a rock surrounded by the Atlantic. But why would anyone want to attack Tintagel? In short, they wouldn’t. Tintagel, Dumnonia, has no strategic significance whatsoever. If you were invading Cornwall you’d simply land elsewhere. Cornwall has a lot of coastline and much of it easier to land on!

Tintagel was useful as a trading point in late Roman times, a link with the Mediterranean. But interest in fortification has been sustained by the King Arthur legend.

The castle has a long association with legends related to King Arthur. This began in the 12th century when Geoffrey of Monmouth described Tintagel as the place of Arthur’s conception in his fictionalized account of British history, the Historia Regum Britanniae

According to Geoffrey and the legend, Arthur’s father was Uther Pendragon, the king of all Britain. He goes to war against Gorlois, the Duke of Cornwall, to capture Gorlois’ wife Igraine, with whom Uther has fallen in love. Gorlois defends himself against Uther’s armies at his fort of Dimilioc, but he sends Igraine to stay safely within Tintagel Castle which is his most secure refuge, according to the legend and the Historia Regum Britanniae.

Uther besieges Dimilioc, telling his friend Ulfin how he loves Igraine, but Ulfin replies that it would be impossible to take Tintagel, for “it is right by the sea, and surrounded by the sea on all sides; and there is no other way into it, except that provided by a narrow rocky passage—and there, three armed warriors could forbid all entry, even if you took up your stand with the whole of Britain behind you.”

Geoffrey of Monmouth’s story goes on to explain how the wizard Merlin is summoned and magically changes Uther’s appearance to that of Gorlois to help get them into Tintagel Castle, while also changing his own and Ulfin’s appearances to those of two of Gorlois’s companions. Disguised thus, they are able to enter Tintagel where Uther goes to Igraine, and “in that night was the most famous of men, Arthur, conceived. – Wikipedia 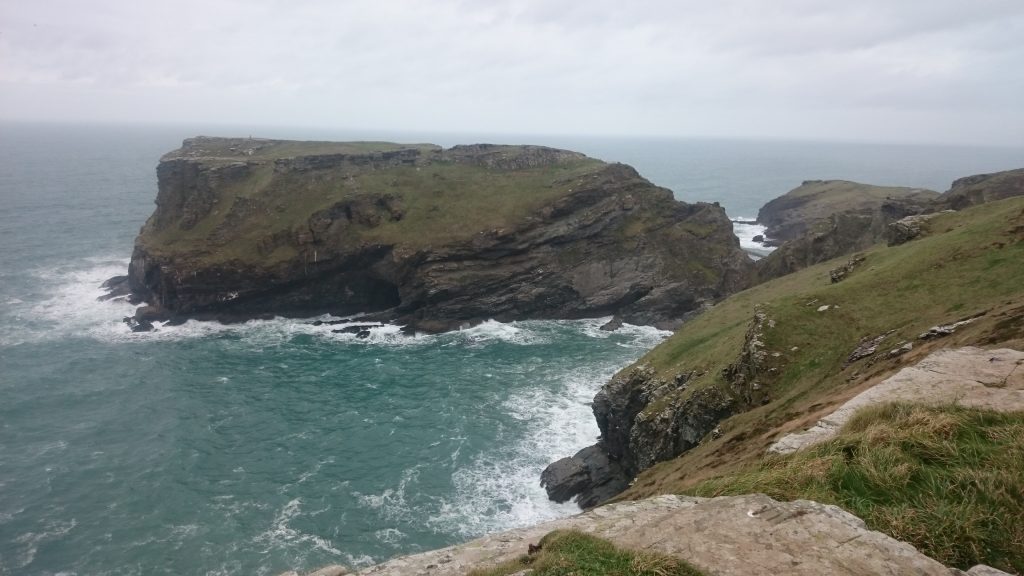 No evidence exists of Arthur.

No proof suggests that Arthur even existed, or if he did that he ever lived at Tintagel. This may be due to the time period involved where legends would have formed an oral history and would have contained nuggets of wisdom from one generation to the next. Feary tales and archetypes.

It is owned by a Prince.

Prince Charles owns Dumnonia, and with it Tintagel, the site is operated by English heritage. There is a charge for entry at weekends throughout the winter. Despite this, no one was there selling tickets and the site was accessible. The bridge had a single bar across stating that the island was closed.

There is a car park at nearby St Materiana’s Church and parking all day for £2 in the village of Tintagel. The village seems to shut down to an extent over winter.  You’ll need to order a drink in a local pub if you need to use the loo.