It is used not only to kill weeds in crops, but also as a desiccant prior to harvesting. The little silica packet that keeps your camera dry is a desiccant – it dries water from the crop and makes harvesting easier.

Glyphosate is sprayed onto plants about four weeks before cutting, after the seeds have fully formed. The surfactants in the mixture are quite possibly the chemicals which pose most risk to organisms because it’s this physical property that allows the herbicide to go the wrong way through the plant. The surfactants allow the poison to translocate.

The glyphosate is the poison, but the surfactants allow the glyphosate to translocate to the very spot on the plant where it might cause the most harm, i.e. the roots. 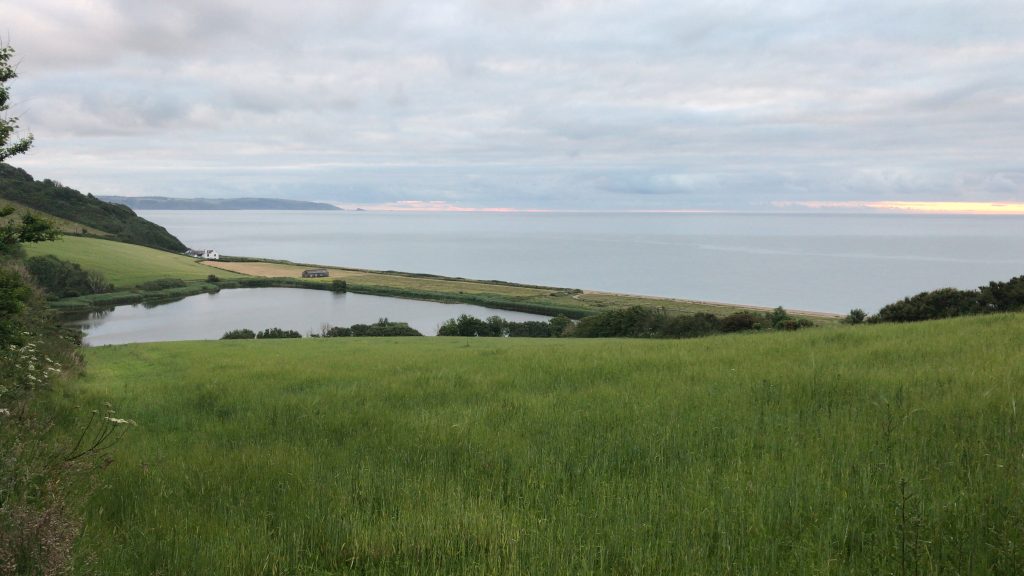 There is a general principle at work here, and that is that consuming any made made chemical must be bad.

That is possibly a safe(ish) place to start, but we eat chemicals with every meal, and we absorb chemicals through our skin and lungs too – some of those substances have appalling sounding chemical names, so it is best to look a little deeper.

“Glyphosate, the active ingredient in Roundup ProVantage, controls weeds by blocking the plant’s protein production system. It stops the production of an enzyme, which is present in most plants but not part of the metabolism of humans, animals, fish or insects. If ingested it passes straight through the body and is not absorbed or accumulated. Glyphosate is not absorbed through the skin and contact with treated leaves would not lead to glyphosate entering the body.”

Bloggers inclined to a ‘natural’ approach will state, sometimes without evidence, that glyphosate causes all manner of ailments from cancer to breathing difficulties to birth defects. One problem with these claims is they tend to lack any evidence whatsoever. But much more worryingly though is that some appear to be backed up by evidence.

In this vein, a small number of court rulings from America seem to have devastating implications for human health around glyphosate use. The three cases have been criticised by scientists for using cherry picked evidence, basically anything that looks like it supports the arguments laid down by the plaintiff’s lawyers smooched together and presented as a single blob of proof.

But the trouble with the blob is that the blob contains all the errant, all the fringe results that won’t repeat when tested again. The blob is vague, unrepeatable, and doesn’t represent the whole of the data. The whole might take a bathtub, but the blob is the only substance offered in court.

All three rulings appear to this writer to have been handed down to the same lawyers, working for the same clients.

It’s tempting to err on the side of caution and assume glyphosate might be bad, and therefore to

reject it out of hand. But this is the most widely used herbicide globally. If it is causing these harms, then we should act with more force and urgency. The spanners enter the works early on in the building of the machine – at both ends we find vested interests determined to colour our thoughts with their own version of the truth. Multiple court cases have both proved and disproved any health implication of Roundup.

Some tests originally conducted on glyphosate by contractors were later found to have been fraudulent, along with tests conducted on other pesticides. Concerns were raised about toxicology tests conducted by Industrial Bio-Test Laboratories in the 1970s[60] and Craven Laboratories was found to have fraudulently analysed samples for residues of glyphosate in 1991.[61] Monsanto has stated that the studies have since been repeated.[62]

Monsanto has fought court cases over several products as well as Roundup. These include Dicamba, PCB’s they dumped into rivers (which they did for 40 years), and, disturbingly, Agent Orange.

We all seem to have some degree of sympathy with a more natural way of life. Despite this, we all seem to like (or at least tolerate) aspects of modern technology. We all like to get the food we want, when we want. And we have yet to make anything remotely tolerable from dandelions. One must wonder how decent a company can be when PCBs and Agent Orange are in their back catalogue.

One “good” thing to come from quacks and pseudo science is that the light they aim to shed upon a subject tends to garner attention. The quacks would prefer that the matter ended there and then and that we would buy some products from their online store to help expel the toxins from our polluted bodies. But sadly for the hit-hungry, the attention has of late come from peer reviewed papers, which far from backing up the claims about health, instead encourage us to think radically differently about Glyphosate.

A recent study has found that research over the last six years shows glyphosate reduces cancer cell’s ability to reproduce (what a great problem to give a cancer cell).

So, have our sheepskins ever come into contact with glyphosate? Well, no.

I’d love to claim this as some sort of ethical or environmental statement but in truth the huge majority of our sheepskins come from Dartmoor itself (we do stock sheepskins from Shetland, check current stock here). This makes intensive farming unviable – the sward is simply too low in calories to make the effort and expense worth it. In pure monetary terms any glyphosate purchase that was sprayed on to Dartmoor land would be a waste of time and effort. And cash.

Dartmoor Sheepskins come from land that is extensively managed, adding glyphosate would be an irrelevant waste of time and money. Dartmoor is basically a huge plant fight between some ferocious contenders with hundreds of years of hard-won growth between them. It’s a state of constant death and renewal, of competition and cooperation.

Disturbing this unstable system and replacing it with wholesale destruction would leave a void. And we all know nature abhors a vacuum.

Clear a patch of Dartmoor and a new patch will erupt, thick with whatever opportunistic weed happens to be ripening at that moment. How would you clear weeds from a moorland made from weeds?

Sheep raised on Dartmoor eat and roam across large areas, picking from scrub, herbs, seasonal fruits and shoots and, of course, low calorie grass. They get a higher proportion of roughage, vitamins and minerals per calorie than sheep raised more intensively. What they don’t get is any effects from land management practices, because there aren’t any.

Of course, much work is done to keep Dartmoor special – I am being flippant in suggesting that nothing is done. But none of it involves glyphosate, which would be crazily expensive to cover such huge areas. And pointless.

Us members of the public might have been led astray regarding glyphosate, just as we were about the MMR vaccine and aspartame. But the fact is, despite Bayer’s legal defence, a court has awarded damages to at least one man, Dewayne Johnson, an American who satisfied the court that exposure to glyphosate and other ingredients in Roundup products caused his deadly form of non-Hodgkin lymphoma. As such, it would seem wise to approach Bayer’s own claims with a degree of scepticism.

In practical land management less is often more, and the same holds true for Roundup. Weedkillers applied to grazing land almost certainly won’t be glyphosate based, as this would destroy the grass we want to promote as well as the weeds in this context. Again, as much as I might like to make hay out of the sheep industry’s low glyphosate use, it is mostly the case that it would be the wrong tool for the job. Like using a hammer to crack a nut.

I might also like to claim some special credit for Dartmoor Sheepskins, from sheep raised on Dartmoor, but the fact is most British sheep will be raised with as little weed killer as possible. Sheep themselves tend to keep most weeds down, and those they miss tend to be eaten by cattle. Sheep are like lawnmowers and prefer ground-based plants. Indeed, sheep are described as the animal with the golden hoof, as they leave the land in a good state. When cows or horses have grazed, sheep are often brought in to clean up afterwards. Nature’s own weed destroyer.

Cows and horses are very picky eaters and leave patches around their own droppings that they won’t eat from – very hygienic. These patches of weeds and grass grow thick and strong and tall – and are too tough and inedible for larger grazing animals. In an intensive farm the droppings are cleared away or spread out thinly whilst the horses are moved to a different field. This reduces the clumping in the field and also dilutes the worm burden.

Sheep will sometimes be brought in to help clear the weeds left by cows and horses, the golden hoof strikes again. Sheep don’t graze so fussily; they tend to eat a wider range of rougher vegetation.

Whilst Devon and Cornwall local councils ruminate on the implications for their own Glyphosate use on pavements, the court cases from America are ringing loudly in their ears. The utility of a weedkiller that degrades readily in the environment and only affects non-animal enzyme production is obvious, but the risk of harm as demonstrated successfully to the American courts cannot be ignored by any responsible public body. This writer is glad to be a humble sheepskin trader.

It would be wrong for me (and potentially stupid) to make any particular assertion regarding the safety of Glyphosate use – the courts were convinced, and the councils are worried. And equally, I won’t make blanket assertions that Glyphosate is never used on Dartmoor. A Freedom of Information Request submitted to Devon County Council in 2019 shows that the council permit the use of Glyphosate in very specific circumstances; spot killing notifiable weeds, like Ragwort and Japanese Knotweed, edging regularly mown lawns and killing weeds in pavement.

But the council has no idea how much of the weedkiller has been used, or will be used in future – this is the responsibility of the contractor doing the work. The same FOI request shows that in the year 2015 to 2019 they received a total of seven complaints about the use of Glyphosate in Devon.

In summary, Sheep eat weeds, they are more likely to eat weeds that have had a good coating of weedkiller simply because of the desiccant action which can leave otherwise unpalatable weeds dryer, and therefore richer in sugars that they would be in their natural state. The weedkiller should pass through the sheep’s system without affecting their enzyme production at all – and the weedkiller should degrade readily upon the action of soil-based organisms.

In reality, our sheepskins almost certainly come from sheep raised without the use of Glyphosates because their use is of limited use to shepherds.

Roundup might be used by some shepherds or landowners on grazing land, but again almost certainly, if used it will be for the spot treatment of Ragwort or Knotweed – and in these cases sheep will be excluded from the area in question because of the harmfulness of those weeds.

I cannot guarantee that our sheepskins are from sheep that have never come into contact with Glyphosate, but on balance of probabilities it is fantastically unlikely, financially unfeasible and practically pointless to use this weed killer in the Dartmoor National Park.

We chose this location precisely because we love its wild nature, weeds and all…

Time to get a fleece of your own? Coordinate colours in your home design, or a roll up pillow ...
Shop Now