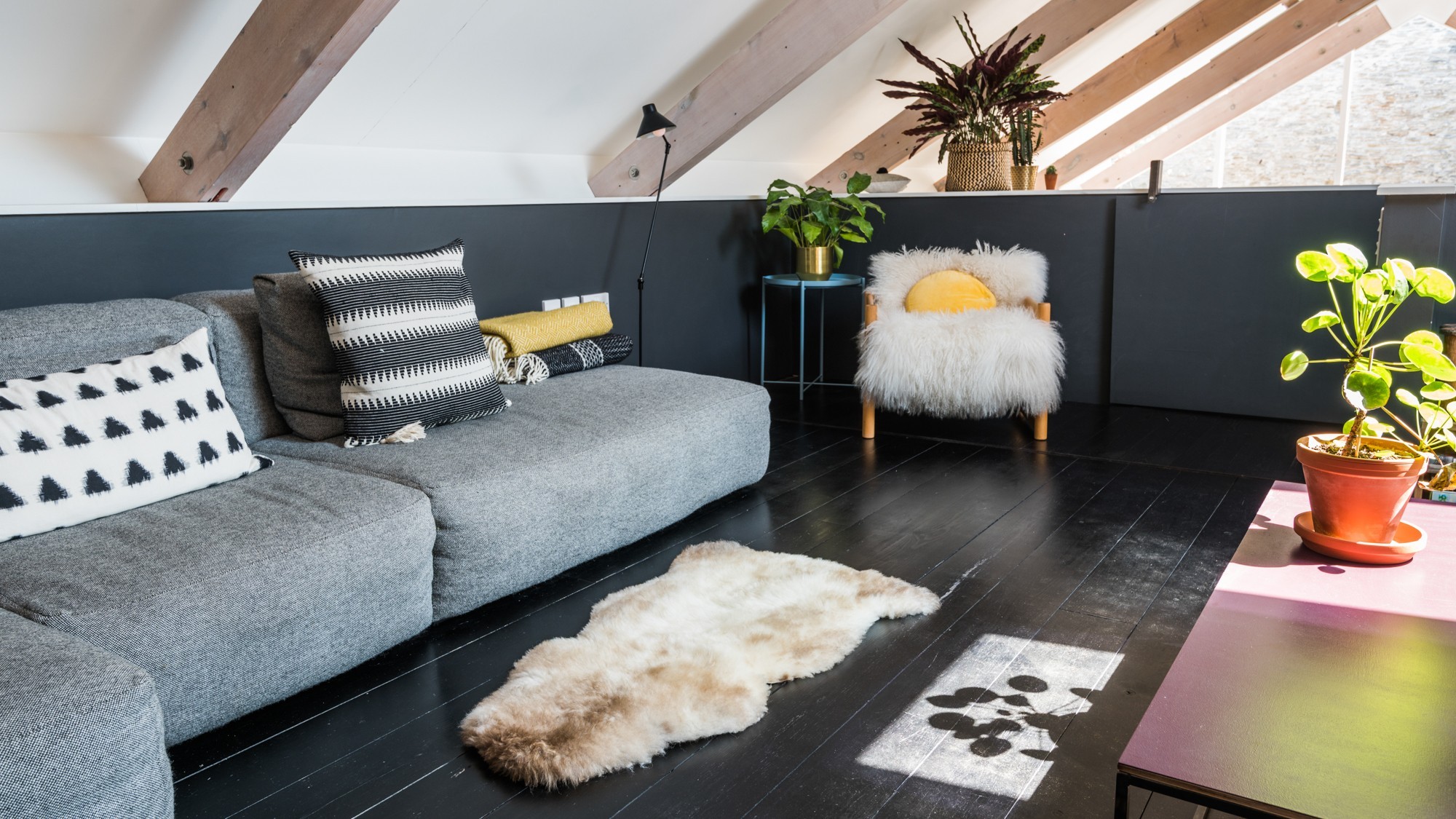 How Darren softened his “hard” home design and made his space more comfortable.

Darren approached us with a confessional problem. He had been underwhelmed by the reality of his own space, a space specifically designed, and then built at considerable expense, just for him.

Darren had come to us humbly seeking softness after living within the hard simplicity of his grand design. As the weeks wore on the beautiful clean lines, the thin steel banisters and hyper-polished concrete floor (even the kitchen worktops are made of concrete – poured into a mould in the basement and ground and polished on-site), seemed cold and left nowhere for the eye to rest. The underfloor heating elements work very well but the place lacked real warmth.

All of these huge structural components; the floors, the stairs, and the interior walls, were purchased as sand and cement and fabricated on-site to Darren’s exacting specifications. Nothing is by chance (and it was all a great deal of work).

So, what went wrong?

The mood shifted in the house; a restlessness was brewing. There was only so much of value that the eye could glean before the next exact corner. And when that corner is reached so smoothly and with such precision, it doesn’t settle. Nothing stops the eye and the eye stops for nothing.

We loved Darren’s story so much because it was a (lack of) mess of his own making. Darren had designed (as a working architect) his own space. Being a practical fellow, and not completely made of money, he had done very nearly all the work too. Each concrete worktop took several strong men to lift slowly, bit by painful bit, to the kitchen. The mix is different from ‘normal’ concrete in that it contains dye, but it also has a plasticiser which polishes to the smooth (and surprisingly kitcheny) surface after just multiple hours of grinding.

Darren now wanted to breath life into each major space with one feature making (or breaking) sheepskin. On the mezzanine living area the grey really shows itself against some of the only colour in the room (apart from the occupants, who should always be colourful). In this case a middle of the road pretty sheepskin provides warmth and reflects colour from the rafters above. 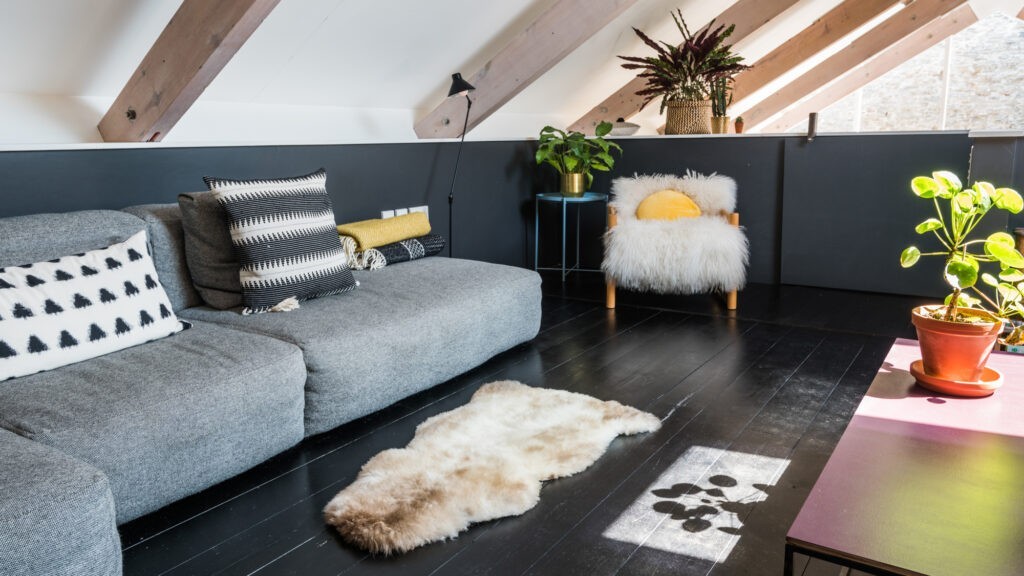 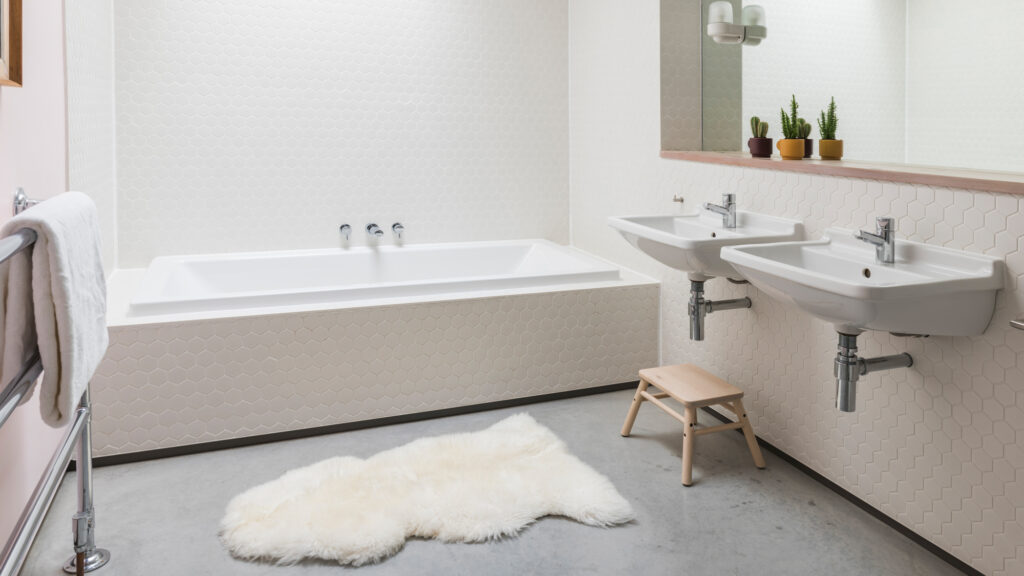 Yes, it is unusual to see a sheepskin in the bathroom, but don’t be put off. Sheepskins are hydrophobic and while they won’t appreciate long term chronic dampness, they won’t suffer for a few splashes. In fact sheepskins process moisture in a remarkable way (that man-made fabrics have so far failed to replicate). Darren moulded the floor with a drain on the side of the bath. This area always remains dry due to the deliberate placing of the underfloor heating, which is perfect because stepping out of a bath onto a sheepskin feels like you’ve seriously arrived in the world.

We know the transition between kitchen and utility is a high traffic area, it’s also where Bruno, a regular Air BnB guest, likes to park his backside. We enticed Bruno just three feet (or about one Labrador) towards the living room and not only does the theme work but the dog is happy too (and safer). Best thing is these things are mobile, so this part of the design at least isn’t set in concrete. 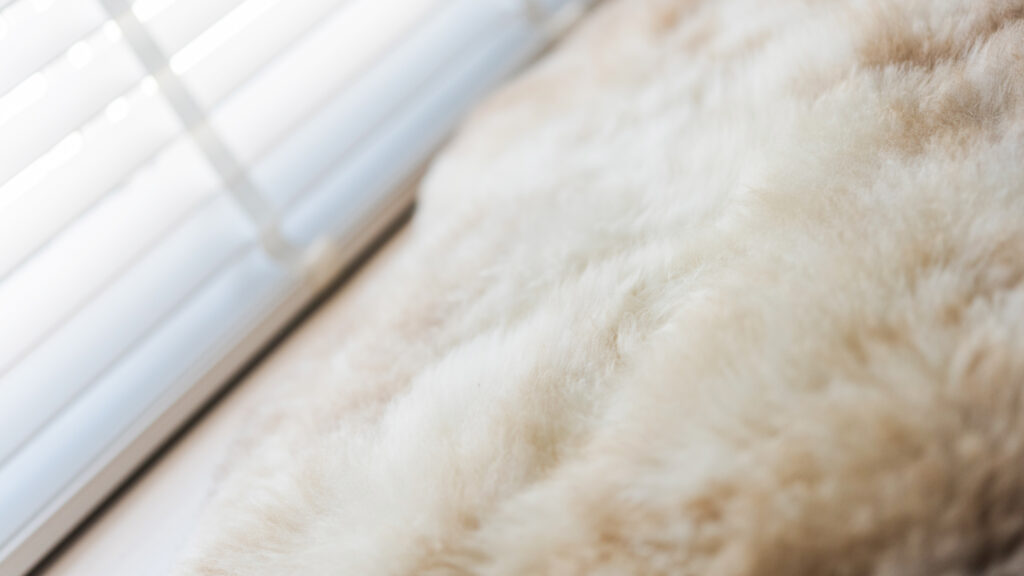