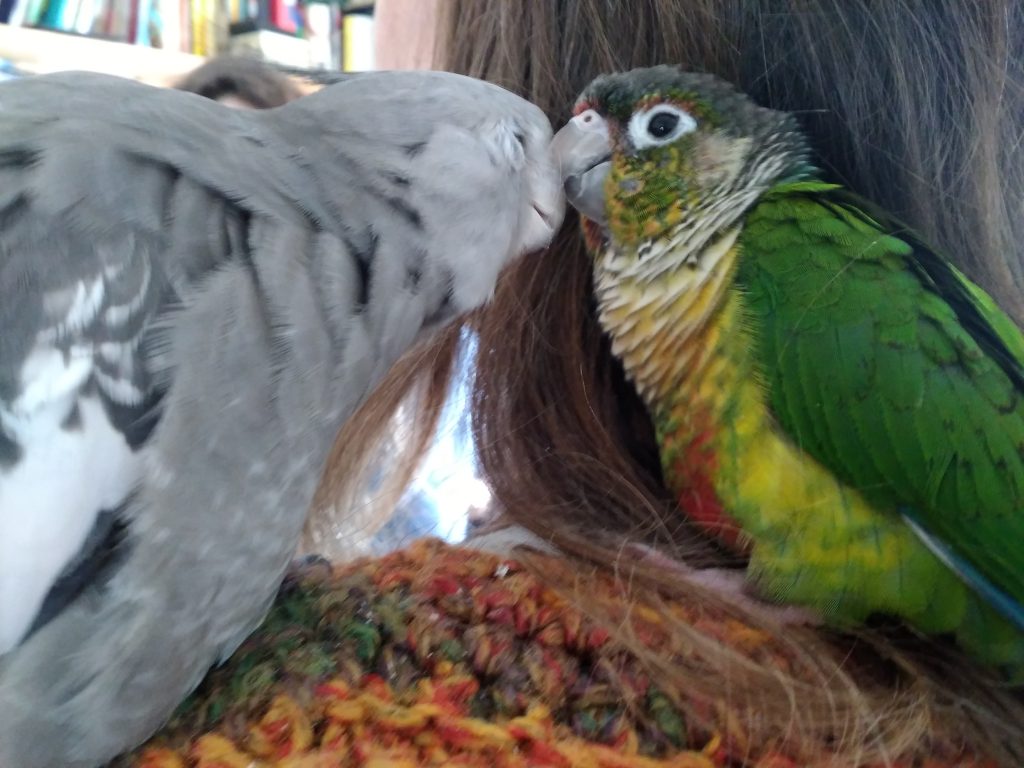 We all need friends, especially in these divided times.

It’s worth remembering that friends come in all shape and sizes. They come in different colours. They come with different languages, different clothes, different food, music, the lot. Even when they may seem so different, the need for companionship is near universal.

So when we nervously introduced Steve, our cockatiel, to Heidi, a boustrous conure, we hoped for the best…. but feared the worst. If they didn’t get on then we might have ended up with a dead bird.

Steve was very reluctant at first but Heidi was having none of it. She persistently tried to entice Steve into play and preening. It was only when Steve discovered how nice the preening felt that the friendship was secured.

The lesson came later with the recent heavy snow.

We walked up the steep hill coming home past loads of deserted cars, and worryingly some with occupants inside. Temperature was set to plummet for the second night and people were trapped.

We invited four people back to our house so they could sleep on the floor in the warm. An interesting thing happened. Before going to bed I suddenly felt that I was taking a risk – I didn’t know these people… maybe they would steal from us?

I left the laptop I write upon on the kitchen table reasoning that it is so battered that no one would want it. But the brand new tablet computer I use to run our online shop, I hid. Now, I had spent a lovely evening with these people who were very nice. The next morning we all confessed to each other, the Polish lorry driver had a moment when he was thinking ‘am I going to get murdered?’, the three folks from Dartmouth had a moment when they wondered if they were safe? We all had experienced some sort of doubt.

But these people are all of us. The odds that any one of us would be deviant are the same as for the general population, they are as likely as anyone to be a decent person, and most people are.

There’s a bit of Steve in all of us but there’s also a bit of Heidi.

Resolutely believing in the goodness of strangers and putting companionship above fear makes the world a better place.

The two birds will see each other regularly as the arrangement means both their owners have bird sitters, and completely for free. When we work together better things can happen. Heidi now enjoys one of our new range of handbuilt Parrot Sticks (posh perches) and we look forward to seeing her again soon. The stranded stopovers all got home safe the next day and we have already been invited over to their place, so all’s well.

No man is an island entire of itself; every man is a piece of the continent, a part of the main; if a clod be washed away by the sea, Europe is the less, as well as if a promontory were, as well as any manner of thy friends or of thine own were; any man’s death diminishes me, because I am involved in mankind. And therefore never send to know for whom the bell tolls; it tolls for thee. – Devotions upon Emergent Occasions, John Donne (MEDITATION XVII)